"Poltergeist III" had a very creepy score written by composer Joe Renzetti ("Child's Play"). In it, he did a good job of giving the highrise setting a cold, disturbing atmosphere. He also gave new themes to both Carol Anne and the Rev. Kane. However, many people have faulted the movie for the fact that Jerry Goldsmith was not hired to write the score. Jerry wrote very memorable scores for the first two "Poltergeist" movies (he got an Oscar nomination for the original, which he lost to John Williams' "E.T." score in 1982).

Although there was an Internet rumor that Jerry was originally contracted to score this film but quit due to budget cuts (and then supposedly used his "unused" P3 score later in 1999's "The Haunting"), this rumor is untrue. Goldsmith was unhappy with the results of "Poltergeist II," and thus did not have an interest in doing the third film. Also, it's clear that MGM did not want to spend the extra money they knew it would cost to hire Mr. Goldsmith, considering that "Poltergeist III" was being made on a lower budget than the last film.

I think P3 would have been better had they at least gotten permission to keep Goldsmith's "Carol Anne's Theme" in the movie. Seeing a "Poltergeist" movie without "Carol Anne's Theme" is almost like seeing a "Star Wars" movie without the John Williams theme!
Here's a link to Joe Renzetti's page for "Poltergeist III:"
http://joerenzetti.net/Poltergeist3.html
It contains an audio file where you can sample some of his cues for the film. I hope to post more score selections here eventually. Below are excerpts from email exchanges I had with Mr. Renzetti in 1998:
Renzetti: Dave, thanks for the complements on my score. Polt III is out on LP on Silva records. As far as why Jerry didn't do the music on 3, I'd reccomend you give him an email and get his reaction.
Question: Was there ever any talk of reprising some of the cues from the first two films, such as "Carol Anne's Theme" and "Rev. Kane's Theme," or was the approach more along the lines of creating something entirely new?
Renzetti: No. Why should I make Goldsmith any richer? I needed the money.
Question: Also, did you score any scenes that ultimately did not end up in the final film? For example, I've always thought the movie ended rather too quickly. At the end, Heather O'Rourke's face is not seen after she comes out of the mirror. Why is that?
Renzetti: No. The ending was a re-shoot and sadly Heather had died by that time. The young girl was a "double." Very observant on your part.
Question: I thought the reason you didn't see her face was perhaps this would have been a setup for another sequel with this Carol Anne really turning out to be the Rev. Kane as had occured previously in the movie.
Renzetti: You're right. I also thought it would be a good story if she met "Chucky."
Question: I would still love to have a copy of your score for "Poltergeist III." Is there a CD available of it?
Renzetti: Yes.
Question: So the ending was re-shot because something was wrong with the previous footage, or because the ending was actually changed?
Renzetti: The first ending just wasn't convincing, so Gary and the studio decided to redo it.
Question: I read that the studio was unsure how to market the film after Heather died and wanted to test audience reactions to screenings and ad campaigns.
Renzetti: It was a delicate situation and although most would agree that it was just a fair film, her death did dampen its success.
Question: I also thought the first "Child's Play" was the best, though I haven't seen the new one ("Bride of Chucky") yet.
Renzetti: You show good taste. The first was the best and certainly had the best music. The 4th is a rip off of "Scream," humor, poking fun, etc.
Question: Do you and Gary Sherman still work together? I know he's done several episodes of "Poltergeist: The Legacy."
Renzetti: Yes, Gary did the TV show and I do work with him.
Question: Do you recall anything more about the old ending and why it was re-shot?
Renzetti: It was a combination of elements. I don't remember the old ending but it was very "dissatisfying" as most good American endings should not be. The special FX make-up sucked, the characters were supposed to be frozen but they looked as if they just survived an egg processing plant explosion. No, by the time Gary was finished with the movie, if he heard another "Carrol-Ann" he probably would have [gone off the deep end].
Question: Thank you for your time, Joe.
Renzetti: You're welcome.
Recently, Sandra, who runs her own German "Poltergeist" fan site, submitted this question to Joe:
SANDRA: I was just wondering about Track 2 "This is my cousin Donna" on the POLTERGEIST 3 Soundtrack. This Track didn't appear in the finished film. What I'd like to know is what scene this was intended for, or was it just a fun thing to compose for the soundtrack?

JOE RENZETTI: I think that was for the scene where the cousin is in the bathroom making up for school. I think. It's been a long time since I worked on that film, and I forget much of these things.
I've looked at the film, and I believe the above mentioned track was meant to begin when the family is leaving the apartment and as they rush downstairs to meet thier carpool minivan. It had a really funky "80s" style vibe to it.
Here's a link to audio samples of the score, courtesy to Craig Sinclair at the Heather O'Rourke library:
http://library.heatherorourke.net/displayimage.php?album=112&pos=1 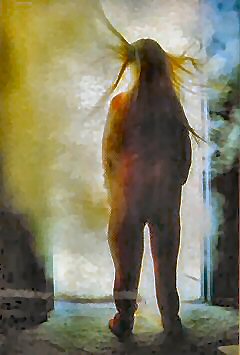