Below are most of the script pages for the re-shot ending, which was filmed during the week of March 14, 1988, over a month after Heather passed away. I transcribed the segment directly from Gary Sherman's shooting script, which is on file at the Margaret Herrick Library in Beverly Hills. I didn't have time to get all the pages, so the first portion is actually a basic transcript I made from the movie (it's very similar to the actual pages).

Transcript from the movie (similar to the actual script pages)

Pat has fallen face down onto the snow- covered floor of the bedroom. As she stands up, she notices the whole room is covered with ice. Electrical discharges and blue laser-like beams of light flash out of the ceiling. Pat sees herself reflected in the wall length mirror across the room. She turns back to the window, feels it. The window is now solid.

Pat moves slowly across the room.

She reaches the mirror. Pleading with her own reflection, she screams:

She reaches for the doorknob, trying to open the door. It won't budge.

Suddenly, Kane's evil laughter is heard from behind Pat. She spins around and looks toward the widows. Mist begins to rise all around the room, Kane and the other spirits hidden within it. The laughter gets louder.

Where are you, Kane?! Where have you taken my family? I want them back! Tangina said you can't take them, as long as someone here loves them. Well, I love them, and I have this...

(she raises the necklace)

Kane's laughter continues for a few seconds more, then dies out. Pat slides along the mirror. We notice her reflection moves too, but a bit out of step with Pat. Suddenly, it spins around, its face a death mask. It grabs Pat. Pat screams, spins around, and raises the necklace toward her evil double.

Pat sees her reflection is back to normal. From behind her:

Pat spins around, as Kane moves up behind her and slaps her hard across the face. She falls down and hits something on the floor. There is the sound of dried leaves. It is the rotting body of DONNA. Pat screams and backs away, now falling on top of BRUCE's withered corpse. The spade he used earlier to break the window is still clutched in his hands.

Give me the necklace!

PAT (slowly standing up, taking the shovel from Bruce)

She swings the shovel, neatly slicing off Kane's head. His body falls back to the floor. Pat looks down at the severed head, lying on the ice covered floor. Its mouth begins to twist in pain, low gutteral sounds emanating from within. Suddenly the face begins to decompose and peel away from the bone underneath.

Her POV-The flesh continues to peel away revealing the mummified face beneath. Kane's mouth opens letting out a blood-curdling SCREAM. But, from somewhere in the distance comes Kane's unmistakable laugh. The storm grows more violent than ever.

Close on PAT-Her eyes fly toward the mirror.

Over PAT-Kane steps out of the fog.

Her POV-She looks toward where the head was.

Her POV-There is nothing on the floor but snow.

Back to PAT-She looks up at Kane.

Her POV-Kane laughs at her, but...

Angle: Pat turns toward the mirror. Pat has to guide her face to look into the storm.

Over Pat and Kane: Tangina steps toward them, but only in the mirror.

Pat looks from mirror to Kane back to mirror.

Pat's POV of Tangina in mirror.

No! Tangina don't. Tell me how to use the necklace, so I can save all of you.

Thank you, Pat. But this is the way it has to be. Say goodbye to Carol Anne for me. Tell her I'll always love her, and that her nightmare is over.

Angle-Pat looks at Kane. Kane walks toward the mirror and touches it. Lightning. He joins Tangina and they walk into the fog.

Close on PAT-Fear wipes across her face.

Angle-Pat runs toward the mirror as Tangina and Kane begin to disappear in the ever increasing glow behind the fog and growing storm. THUD! Pat hits the mirror.

Tangina! Where are they?

The glow behind the fog grows into a blinding light. The sound of the storm builds to an ear-splitting level, drowning out Pat's scream.

6 Close on PAT-Tears run down her face, as she claws at the mirror. Then distant voices come wafting through the violent storm. Pat pries her eyes open.

22 Angle-in the mirror, far away, a tiny red clad figure proceeds two other figures as they emerge from where Tangina and Kane dissapeared. Bruce's, Donna's, and Carol Anne's cries of "Pat" cut through the storm, momentarily before the storm's lightning and thunder obliterate everything into a white explosion.

20 As the explosion clears, the Gardner family and Carol Anne are huddled together in Carol Anne's bedroom. Pat holds Carol Anne tightly against her. Bruce has his arms around them and Donna. 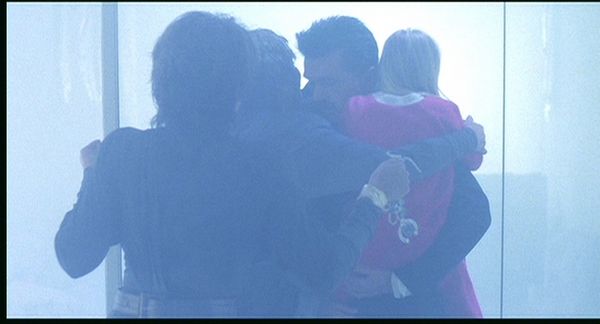 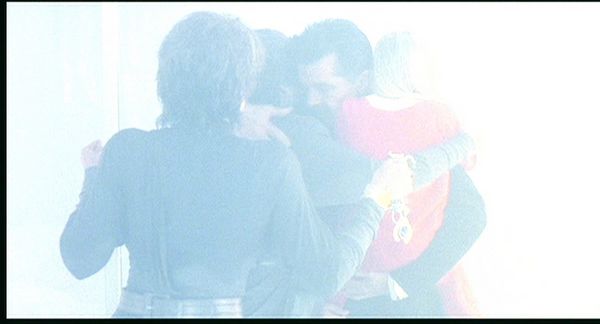 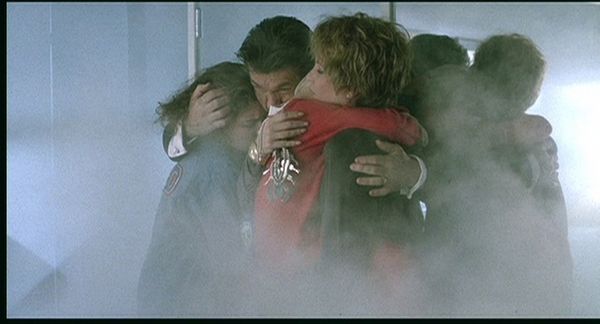 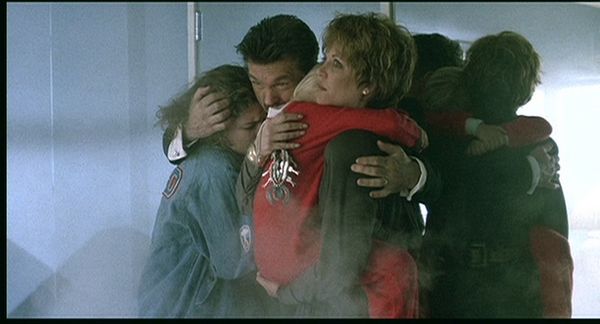 Now back to my transcript, since the actual script pages ended above. Perhaps they simply improvised the following portion on the set during filming:

Pat looks down at the necklace, then at her family.

Lake Michigan can be seen in the foreground. The morning is bright and sunny.

Apparently, Gary Sherman wanted the film to end right here. However, MGM was still not satisfied (likely after poor test screenings). So, in an effort to "punch up" an ending that "everyone hated," as well as ensure a more standard "horror movie" style open door for yet another sequel (even though it directly contradicted what had been seen just moments before), the following optical special effect (about the only true optical FX shot in the whole movie)was tacked on:

Two BOLTS OF LIGHTNING quickly shoot down from the sky, making contact with the building and arching across it. Kane's evil laughter is heard coming from everywhere, but slowly dies out as the end credits begin to roll.

Finally, here's some more info regarding the shooting script, from the notes I made during my original visit in October, 2005 (I went back again in May of 2008 and made some additional notes)

Today I visited the Margaret Herrick Library off La Cienega Blvd. They have many scripts, manucripts, and books related to the film industry. I had to sign in, present proper ID, and fill out a form explaining why I wanted to research there. Gary Sherman's personal copy of the "Poltergeist III" script was on file in their special collections department. I got to read it (along with early drafts of P2) for a 3 and a half hour period. The P3 Script was really cool-it was color coded, and had lots of notes and sketches attached. There were storyboards for all the major effects sequences. One of the things I think I finally figured out was how they did the scene where Carol Anne is pulled up the mirror. It was described as a "flying mirror" in the storyboard, and it seems the mirror was rigged to actually move up, so it appeared only Carol Anne was moving, as the rest of the reflection stayed the same. There were floorplans for most of the major sets, as well as official building floorplans for the John Hancock Center, polaroids of makeup effects, a shooting schedule, location information, AND....a script segment for the re-shot ENDING! AND...a DATE. It appears that the segment for the reshot ending was listed as REVISED March 14, 1988.....AFTER Heather died. Unfortunately, the scripts at the Library cannot be photocopied because they are "unpublished," although you are allowed to take notes.

Another thing about the script....the old ending was still included in the pages preceding the re-shoot pages (except for the page in which Kane's face "explodes with light," page 111), but some parts (pages 110 and 112) had big red X's through them.  The new re-shoot pages (5 in all) had been inserted between pages 110 and 112. Finally, one grammatical correction was noted on the page of the old ending. The part where Carol Anne looks toward the "broken" window after seeing Tangina was written over with pen to indicate that it was an "unbroken" window.