Mystery of the Re-Shot Ending (3 of 3)
**********************
When working on my initial “Gorezone” article, I was informed that their office had received a statement from a source who worked on the film, regarding why Kip Wentz’s character “Scott” wasn't included in the re-shoot:
"It was an oversight stemming from the emotional and logistical turmoil over the loss of Heather O'Rourke, in her 'iconic' role as the series' central character; and the budget had run out at that point [after the re-shoot had taken place], with 'Scott' not being considered essential enough to the movie for the studio to go through the expense and complication of arranging another re-shoot with Kip present. This turned out to be a terrible blow to the young actor's self-esteem, and a classically painful 'Hollywood Experience', resulting in more than a decade of career and emotional 'free-fall' (which, reportedly, he has fully recovered from in recent years)."
In regard to Heathers death:
"As explained in the news reports at the time, if only they had seen a specialist when her unusual symptoms first appeared (instead of blindly accepting the typical HMO 'shrug and runaround' style of care they had, even when she was healthy), she would have easily been put back to normal, vibrant health;  and most likely would be alive and well at the present time.  Though life-threatening, a bit of fairly unremarkable surgery would have completely restored her physical condition, if caught in time."

I’ve also heard from a source who claimed that the original ending from “Poltergeist III” still exists within the archives at MGM. I of course have no way to confirm this tip, but perhaps MGM will one day shed some light on the issue. After all, they stand to make some extra money if they put any cut scenes on a special edition DVD, especially after all this controversy. Here’s an interesting excerpt from the “Poltergeist III” press kit, given to the media by MGM at the time of the film's release (emphasis mine):
HEATHER O'ROURKE, who died unexpectedly in February, 1988 from complications of a congenital intestinal disorder, made her film debut at age five in "Poltergeist," and was nine when she reprised her role as Carol Anne in "Poltergeist II: The Other Side." Heather was just 11 when she filmed "Poltergeist III," which was completed several months before her untimely death.
Here’s a posting that Tammy, Heather O’Rourke’s older sister, made in 2003 to the www.heatherorourke.net memorial site message board (again, emphasis mine):
Q: Hey Tammy, why did Heather like flamingos so much? About how old would you say she was when she started to like them? Thanks
Tammy:
She enjoyed the flamingos because they were so pretty. She went to Florida after filming Poltergeist 3 and that's when she fell in love with them.
Here’s an excerpt from the interview I did with Corey Burton, the man who provided the voice for the Rev. Kane in “Poltergeist III:”
Q: One of the things I've always wondered about is the film's re-shot ending. Did you ever do any dubs for the original ending?
Burton:  I do remember going in to record after Heather’s tragically untimely death; and I may have recorded a little something at the first session [the PG rated cut of the film, in 1987]... But I seem to recall that it was already established, that the ending would be reworked, and Gary Sherman didn’t want to waste studio time recording what would most likely not be used anyway.
Q: One thing that always bugged me about the very end of the movie is when lightning strikes the building just before the credits go up, and Kane's laughter is heard, presumably leaving an open door for yet another sequel. Did Gary/MGM ask you to do that scene with the express purpose of a possible sequel in mind, or was it just a last ditch effort to "punch up" the ending after Heather died, when they were forced to come up with that abrupt ending?
Burton: Both assumptions are correct.
This is what the (very reliable) urban legend web site www.snopes.com had to say about the “Poltergeist Curse:”
http://www.snopes.com/movies/films/polter.htm
"O'Rourke appeared in all three Poltergeist movies. Poltergeist III had been completed at the time of her death although it had yet to be released, leading to rumors that she had expired during shooting and a double had to be used to complete the picture. (Poltergeist III was in the can by June 1987 but wasn't released until 10 June 1988; however, writer-director Gary Sherman decided to change the ending of the already-finished film after O'Rourke's death, so a double was used to shoot the alternate ending.)"

More "smoking gun" evidence: According to the revised shooting schedule below, dated 6/19/87, the original ending sequences were filmed on Tuesday, June 23rd and Wednesday, June 24th. Notice also that it says "Completion of principal photography" by Thursday of that week. 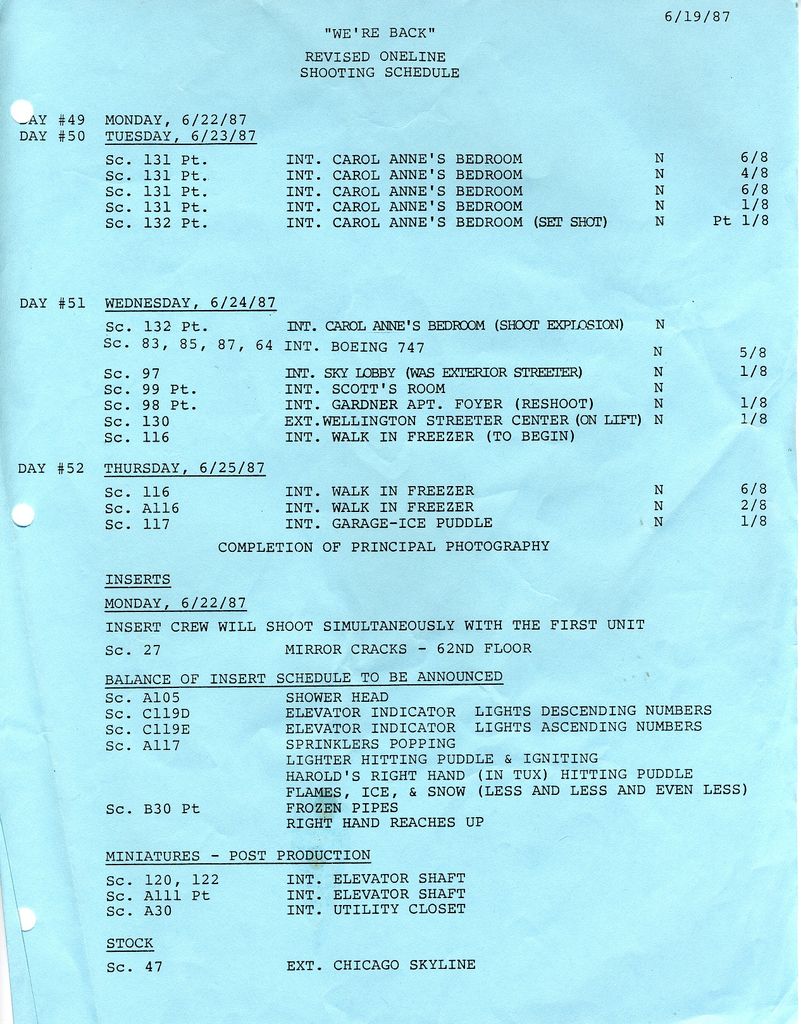 Finally, the key piece of evidence proving that “Poltergeist III” was finished at the time of Heather’s death is the fact that the film was originally rated PG in 1987, the week of November 23, 1987, to be exact. I learned this from Joan Graves, the head of the Motion Picture Association of America Ratings Board. According to Joan:
“We always see the entire film before issuing a rating. There have been times when computer graphic effects have been incomplete initially but we see a complete version before a final rating is given.”
The re-shoot took place the week of March 14, 1988. Apparently the planning for it began in December 1987. Doug’s notes on the new SFX continued into January, and the re-shoot may have been initially scheduled for February. After Heather died February 1st, the re-shoot got pushed back to March. It was announced the week of April 25, 1988 by the MPAA that "Poltergeist III" had been “re-edited” and was awarded a new rating of PG-13, apparently satisfying the studio heads. The scene of Kane getting his head sliced off with the shovel was probably the deal breaker that upped the rating from PG to PG13.
Perhaps we'll never know exactly what really happened with "Poltergeist III" after Heather O’Rourke’s tragic death. Maybe one day MGM will dig into its archives to see what, if any, footage still exists. If the original ending can be found, it would only be fair that her fans be allowed to see it. It was confirmed to me by MGM PR in 2006 that there are over 100 boxes of footage related to the film in their vaults...perhaps the original ending can be found there.
One last note: I emailed this article to Mr. Sherman’s PR firm, in the hopes he‘d provide a comment in response that I could include before I submitted the final version to "Gorezone." I never heard anything back.
******************************
NOTES:
*=In prepping my articles, I  attempted to obtain statements from multiple cast/crew members, including the PR reps for Tom Skerritt, Nancy Allen, Lara Flynn Boyle, Nathan Davis, and Zelda Rubinstein. Nancy Allen's PR contact refused any interview requests when I contacted them. I never heard back from Lara Flynn Boyle's PR person. Nathan Davis sent me a handwritten note in the mail which said "David...sorry I can't help you." "Gorezone" did do a brief interview with Zelda via phone, but unfortunately she claimed not to remember much about the ending, and her interview wasn't used (the staff told me later that she seemed "rude" on the phone when asked about the issue, as though she just didn't want to talk about it). Tom Skerritt has always refused interview requests about the film.
Here's the interview "Gorezone" did with Zelda:
GZ: Was the ending completed and ready to be put together before Heather's death?
Zelda: Maybe.
GZ: Do you recall the original death of Kane? Was it filmed? Was it the head explosion?
Zelda: Could have been.
GZ: Do you prefer the original ending or the re-shoot?
Zelda: Yes.
GZ: Joe Renzetti made the following statement. Can you confirm it or deny it? "The special FX make-up sucked, the characters were supposed to be frozen but they looked as if they just survived an egg processing plant explosion."
Zelda: No I cannot confirm it. NO.
GZ: Did MGM put pressure on everyone involved to take part in the re-shoot, and why was Kipley not asked back?
Zelda: No.
Zelda also did this interview with Iconsoffright.com in October 2007, for the promotion of the "Poltergeist" 25th Anniversary DVD. She seems to have again offered a wishy washy response regarding the re-shoot:
Q: What about the rumors that multiple endings had been shot for "POLTERGEIST III?"
A:
The ending that I did was what I saw on screen. If there were other endings it must have been done because Gary Sherman wasn't happy. Gary's a good director, and he's also remained a good friend.
Finally, the following is what craft services man Michael Kehoe told me. He worked on the re-shot ending in Los Angeles. He also knew the first assistant director on the original film, who happened to share the same last name:

David, I have worked on so many films that most of the past is but a blur. I was the craft service person on that picture [P3] and knew the first assistant director. We happen to share the same last name, no relationship.  I am writing and directing now as well as keeping the craft service biz alive while handing the torch to someone else. I do remember the shots with the new girl and remember her being a little larger than Heather the original actress. I also remember them being cautious about covering her face. It was an odd shoot to say the least but I know that Gary Sherman had a great deal of weight on his shoulders in regards to this film. And the tragedy of the loss of two young actresses Heather and Dominique was a shame. I wish I had more interesting information to share but it seems that you have just about all the info there already.

UPDATE: In early 2010, I wrote another follow up article for "Gorezone," laying out much of the same info presented above. The magazine tried to obtain an official statement from MGM on whether the original ending with Heather was filmed, and if so, did the footage still exist in the archives. A lower level MGM PR staffer initially said (over the phone) that it was their understanding that the footage was "in the vaults." But after the MGM Legal department got involved, suddenly the official written statement issued by the senior PR person was " We do not have any comment but are continuing to look for information regarding your questions." When "Gorezone" then tried to follow up directly with that rep, the rep claimed that the lower level person's comments about the vaults was "misunderstood" and only re-iterated his "No comment at this time" statement. He did again say they were "continuing" to look into the matter.
Finally, I attempted a follow up directly with the PR rep, and was given this statement:

"We are going to stick with 'no comment' on this situation."

(Interestingly, this time the "we're continuing to look into it" was NOT included).

Needless to say, we never got another response from MGM.