10-29-11
Check out the (very negative, but funny and profanity laced) YouTube review of "Poltergeist III" below, in which this site is mentioned:
http://www.youtube.com/watch?v=QYx_vegM8ss&feature=related

MGM announces that a new "Poltergeist" is still on track! (But is it a remake or a sequel??)

Here's hoping that the studio has reconsidered the remake idea since all their financial woes, and has decided to truly go with a direct sequel to the original films. The above article refers to a "fourth" film. I think it would be really cool to see a "Carol Anne grown up" continuation......what do you think?

12-26-10
POLTERGEIST IV FOOTAGE! (kind of)
Who knew that Bruce got divorced from Pat, became a cop, and that Diane got divorced from Steven and became a psychologist!:
http://www.youtube.com/watch?v=-Z3Hq2PNMFY
(Clip above is from a TV movie called "Child of the Night," aired in 1990. It starred both Tom Skerritt and JoBeth Williams. Wonder if they swapped any "Poltergeist" stories during filming!)
11-24-10
Mysterious photo of scene not in finished film!
This shot can be seen on the back of the new Blu Ray DVD box (available overseas, not yet in the U.S.) 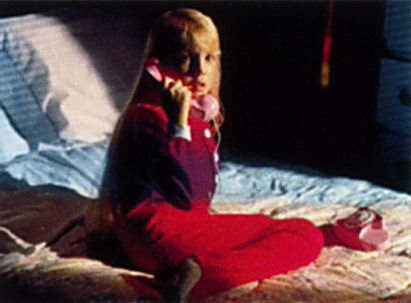 Notice in the above publicity still she has a toy telephone, similar to the one from the second film. What's going on here? The toy phone wasn't in part III. Was this from a deleted scene? Not likely, since no such scene was in the shooting script.

My theory: this is a still shot from a scene that was filmed only for the movie's trailer, but removed by studio executives after Heather O'Rourke died. Notice this excerpt from a March 23, 1988 L.A. Times article:

–Meanwhile, safe is better than sorry: Scrambling to regroup after O'Rourke's death, cautious studio executives trimmed a shot of the actress from their initial trailer. But they left in a voice-over in which she delivers the new kicker: "Guess who's back in town...?"

In the finished trailer that was released, there is an extended helicopter shot flying through downtown Chicago (filmed only for the trailer, not in the actual movie). As the camera approaches the John Hancock Center, there is a quick zoom in to a close up of the building before a series of quick cuts from the actual movie. My guess is that before Heather died, in between the zoom in and the quick cuts, there would have been the above scene of Heather on the bed, answering the toy phone, and then looking at the camera saying "Guess who's back in town?" After the L.A. Times article was published, the studio execs must have further changed their mind, and removed the Heather O'Rourke voice over completely. The released trailer has a male voice over saying the line "Guess who's back in town" just as the Hancock Center comes into view. Yet another reason why this film needs a Special Edition release on DVD....

A Special Thank you to all those readers from around the world who have visited over the past five years.  I'm always fascinated to see the far flung places this site receives hits from, not just in the United States, but as far away as China, Egypt, and even Iraq! Thanks also to all those who've left positive comments in the Guestbook (and even the not so positive comments, such as "This site suck" and "Is this page a joke? Poltergeist III sucked!" LOL)

Some might not realize that this web site is dedicated to all three films in the franchise-you can find the links on the left side of this page to the sections on parts I and II (as well as the once considered fourth installment and the "in development limbo" remake).

Thanks again for visiting!

8-25-10
P3 to be released on BluRay in Japan on November 5th! Unfortunately, it seems that the only extras will be the trailer (boo MGM/20th Century Fox!). Looks like it will be in 5.1 DTS though, which should be cool. Here's the cover art (P2 will be released the same day on BluRay as well) 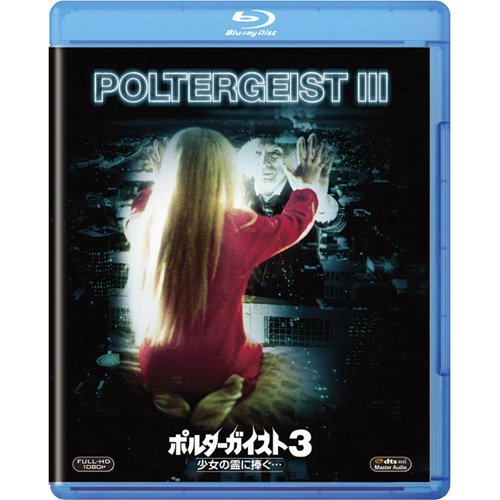 (Special thanks to Jerome at
http://forgottensilver.wordpress.com/
for the tip!)
7-30-10
Ok, this is kinda funny. A fan on YouTube created a parody trailer for P3. What if Carol Anne was evil?