7-11-10
Check out this interesting new interview with P3 director Gary Sherman that Jason Bene recently did:http://www.killerfilm.com/spotlight/read/late-night-classics-poltergeist-iii-35518
As usual, Sherman claims the original ending with Heather O'Rourke was never filmed before she passed away, and then goes on to denigrate those who say otherwise:

Jason Bene: There has been a lot of chatter on the internet about the ending of the film and was there an alternate ending.

Gary Sherman: [Laughs] There’s a lot of talk about it by a lot of people that I think need a life. It’s a movie. It’s what it is and this is not the ending that was supposed to be on the movie. Dick Smith and the people working with him did not have all of the FX ready in the time that we were given shooting the original film in Chicago. We couldn’t shoot the end in Chicago because we didn’t have enough of the proper crew. I was up to my eyeballs busy. It was unfortunate.

However, this is false, as evidenced by the records still on file at the Motion Picture Association of America: that a finished version of the film was rated PG in November, 1987-almost three months BEFORE Heather passed away (February 1, 1988).
Even the IMDB states on the film's ratings section:
http://www.imdb.com/title/tt0095889/

USA:PG-13 (edited for re-rating) USA:PG (original rating)
On the comments section at the above linked interview, I listed multiple cast and crew sources that contradict Sherman's version of events. Also want photographic evidence? Here's a shot of the original ending being filmed on the Chicago set, circa late June, 1987. Notice the "frozen Carol Anne" on the bed in the background (a scene not in the re-shot ending), and the cameraman actually filming the scene on the bottom right: 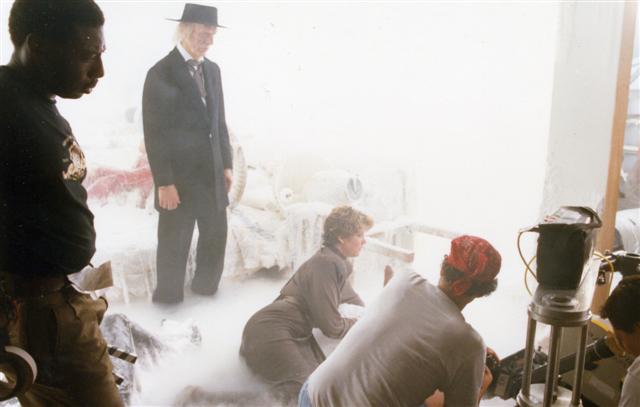 Despite the odd claim about the ending, Gary does provide some interesting details about how he learned of Heather's tragic death:
The day that Heather died I was in Chicago doing some pre-production on a television show I was producing....Barry Bernardi was in Chicago with me and we were going through some of the pre-production. I get a call from David Wardlow, who was Heather’s agent and a good friend of mine. He said, “we’re setting up a conference call with Dick Bergerin [Executive Vice-President of MGM] in a half an hour, are you going to be available?” I said, “yeah, what’s it about?” He said, “I can’t tell you.” Barry and I sat down in my apartment in Chicago and we gathered around the phone, and a half hour later it was Jay Kanter, Alan Ladd Jr., Richard Berger, Barry Bernardi, and myself all on the conference call. David announced to us that Heather had died that morning. Basically, Jay and Ladd just said, “why don’t you just get on a plane and fly to Los Angeles and we’ll figure out what we are going to do.” I flew into LA and Barry and we went into Laddie’s office and we sat down and we said, “what are we going to do?” ‘Laddie’ said, “I don’t want to release a movie with a dead twelve year old in it.” Jay was in total agreement. Both of these guys are very much family oriented people. I said, “I don’t think I could even stand to sit in the cutting room and finish the movie and look at Heather every day.”

The day after the funeral we had a meeting at the studio. The decision was to not finish the film, which I was quite happy to do considering we had sixteen or seventeen pages to shoot. ‘Laddie’ and Jay said, “go back to Chicago and do your television show and we’ll figure this out.” The board at MGM did not have the same feeling because they had a lot of money invested in the film. They owned the footage. Basically, that’s what transpired. We talked about it and we said, “well, what do we do?” I don’t want somebody else taking all of my footage that I worked on for two years and doing something with it and that I would hate more than I am doing myself. I wrote a stupid new ending that’s on the movie, with Carol Anne on Tom Skerrit’s shoulder facing away from the camera..."

They also discussed how MGM promoted the film:

Gary Sherman: It was the board who wanted the picture released and the executives at the studio really didn’t want to release the movie. I didn’t want to release the movie and I didn’t want to do any publicity. Tom didn’t want to do anything. Nancy didnt want to do anything. Zelda absolutely, one hundred percent refused to do any publicity whatsoever. She just said, “Heather’s dead, I am not doing this.” She called me and said, “what do you think I should do?” I said, “I am not doing any publicity.” I was inundated by all of the tabloids. The papaparazzi were just everywhere. All that anybody wanted to talk about was Heather dying. I absolutely refused to discuss it until about 2000 when the E! Channel came to me and said they wanted to do a True Hollywood Story. I agreed to do it only if I had final cut. They did a very tasteful job on the whole thing. They did a three-hour special on the curse of Poltergeist. It was really well put together. They play it every year.

The fact the he had final cut probably explains why the tabloid style E! documentary didn't include interviews with any people who contradicted his version of events about the ending.

3-12-10
MGM Source: The original ending was filmed, and it's in the vaults!
Unfortunately, when asked to confirm the above claim, the only official studio response (from Grey Munford, MGM's Director of Corporate Publicity) was "No comment."

Despite this non-statement, you can see for yourself the evidence (with photos) that the original ending was shot here:

This all was in reference to an article I wrote for this month's issue of the British horror film magazine "Gorezone." You can read it here (it's the last article at the bottom):
http://heatherlibrarygz.blogspot.com/

Because of the publishing deadline, "Gorezone" wasn't able to include the revised version of my article. Here's the part that I'd hoped to include at the end, as a last minute update:

A few years ago I was told by a PR rep for MGM that there were "over 100 boxes" of footage related to "Poltergeist III" in the vaults. At that time, the studio rep informed me that they didn't have the "time nor the money" to search through the many boxes. A source later claimed that the original ending had in fact been shot and that it likely was contained somewhere within these archives. However, allegedly due to possible legal reasons, the studio is not interested in confirming any of this. In fact, the only official on the record response received by "Gorezone" from an MGM spokesperson was "no comment."

One last thing which may shed some light on this issue. During the week of March 21, 1988 (a week after the re-shoot quietly took place), a news article was published in the L.A. Times  about how the studio was trying to deal with the film after Heather's passing. This extended excerpt is very interesting (pay special attention to the last sentence:

"The sudden death last month of 'Poltergeist III' child star Heather O'Rourke brings MGM face to face with one of the toughest dilemmas any studio's movie marketers can expect to encounter. The second 'Poltergeist' sequel was already in the can, at a cost of more than $10 million, when the 12-year-old actress died of what had seemed to be flu symptoms, but proved to be septic shock from an unsuspected bowel obstruction.  Now MGM has to sell the picture without seeming to exploit Heather, and without creating ghoulish confusion between screen threats to little Carol Anne Freeling and the young actress who played her.  'We're caught in a dilemma,' acknowledges MGM marketing senior vice president Barry Lorie. As Lorie sees it, 'normal adults, and obviously fathers with daughters, like myself, might be very offended' by almost any reference to Carol Anne/Heather in a studio marketing campaign.  O'Rourke was featured on poster ads for the first two 'Poltergeist' films and is among the top name stars in the third. But Lorie can already imagine angry letters to MGM/UA Communications Co. chairman Lee Rich if the MGM division appears in any way to trade on O'Rourke's death in handling 'Poltergeist III.' So how will MGM catch the eye of teen terror-fiends without deeply offending their parents? The studio hasn't firmed up marketing plans for the June 10 release yet. But some things are clear:  –Publicity is out: Promotional interviews are a favorite tool in selling horror films, and O'Rourke did some publicity for the earlier films. But MGM wants stars Tom Skerritt and Nancy Allen generally to avoid interviews, which would inevitably lead to maudlin questions about Heather. MGM is particularly worried that the tabloids might try to conjure some spooky mumbo jumbo from the fact that an actor has died shortly after finishing each of the 'Poltergeist' films. –Meanwhile, safe is better than sorry: Scrambling to regroup after O'Rourke's death, cautious studio exectives trimmed a shot of the actress from their initial trailer. But they left in a voice-over in which she delivers the new kicker: 'Guess who's back in town...?' Producer Barry Bernardi, Lorie and Wardlow all said they didn't believe the film would need special editing to defuse any horror scenes that might seem tasteless in light of O'Rourke's death."

Notice how the last sentence above makes no reference to the re-shot ending which took place the previous week? It's clearly because the studio didn't tell the newspaper reporter about it. Apparently the "special editing" needed to "defuse any horror scenes that might seem tasteless" had already been done, and the studio didn't want to talk about it.  In January 2006, I sent an email to Barry Lorie, who was the marketing senior vice president for MGM back in 1988 and who was quoted in the article excerpt above. I asked him if he could shed any more light on how the studio handled publicity for the film after Heather's passing. Here's what he sent me:

"It's too long ago for me to recall any more info than you already have. MGM wasn't too keen about the picture from the git go, and with the untimely death of the child, it was a project that sort of fell through the cracks. I'm sorry I can't be of more help."
And last but not least, I sent requests for comment on this subject to Tom Skerritt, Nancy Allen, and Lara Flynn Boyle via their representatives. Tom Skerritt's PR person wrote back and said "Mr. Skerritt is not available to take part in your story." I never received a response from either Nancy Allen's or Lara Flynn Boyle's reps.