(Part II of this page can be seen at http://www.poltergeistIII.com/makeups2.html) 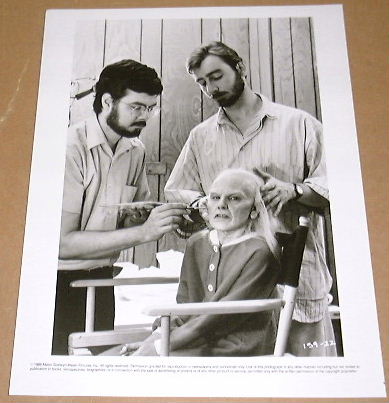 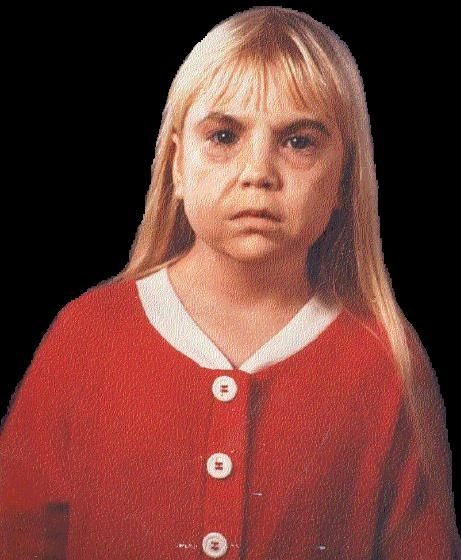 (above, Heather O'Rourke in an early stage of the Kane make-up. It was decided to use stand in Kristy Davis for end stages since her face was thinner. That way Heather could also spend less time in the make up chair.) 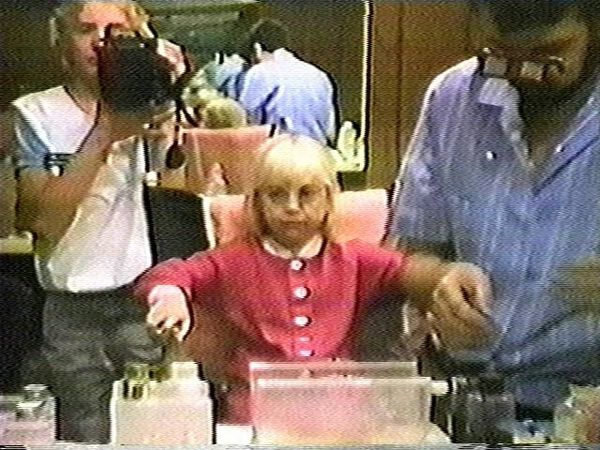 (above, archive behind the scenes clip from home movie shot on set)

sent me regarding his work on P3:

Dear David,
Thanks for the e-mail.  You know, that job was such a pain in the neck
that I have blocked alot of it out.  But one nice thing was working with
Heather O'Rourke, she was a life force for real, I was shocked when she
passed away.
Good Luck and God speed.
John Caglione, Jr.

And here's some exchanges I had with Mark Shostrom, who also worked on the makeup effects:

My contribution to Poltergeist III was minimal.  I did
life casts (alginate impressions and plaster casts) of
Heather O'Rourke and Zelda Rubinstein.  These were for
my friends John Caglione and Doug Drexler, who were in
charge of the special makeup.  Dick Smith was special
makeup consultant on the film.

Since John and Doug were based in New York and I was
in LA (as were Zelda and Heather), I simply took the
casts and shipped them off.  I did Heather's face, and
her hands/arms for a mirror shot;  also did Zelda's
face and body for a dummy.

Since I wasn't on set, I don't know anything about
re-shoots, or about filming after Heather passed away.

I do remember Heather was a very sweet girl, and let
me take a joke photo with her.  In the photo, Heather
was holding a telephone and we put a cardboard balloon
above her head which read: "They're here!"  I was sad
to hear when she died.

I responded:
As far as your lifecast for Heather's arms, was that for the scene in which she is forced back from the mirror as "holes" of light burst open (right after the fingers come through and she is pulled up the side of the mirror)? I've looked at that shot in slow motion before, and it looked like the arms were a prop. In fact, I ordered the trailer of the film from Ebay years ago, and noticed that below the matte line (which isn't meant to be seen when projected in theatres), you can actually see someone's hands pulling the extra long arms away from the mirror!
As for Zelda's lifecast, I guess that was for the scene when Lara Flynn Boyle bursts out of her stomach!
Do you still have the picture you took of Heather holding the phone? It would be great to get a scanned copy of this.
Mark:

I believe the scenes you mentioned are the ones I did
life casts for.  I remember Doug Drexler was at my
shop helping for one of the days.

I don't know where the photo is, but if I find it I'll
let you know.  It may take a while to dig up.

Below is what I believe to be the face cast that Mark was talking about. It may have been used in the original ending as part of the "frozen bodies" of the family. This picture was placed on Ebay at one point and someone apparently won the auction: 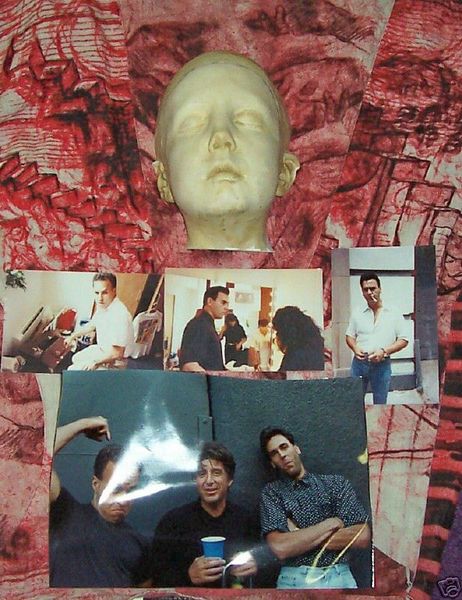 Following is an email response that the wife of Anthony Fredrickson sent me. Anthony designed the "articulated Kane puppet head" that was used in the March 1988 re-shoot at the MGM studios in LA. In the original ending, Kane's face "exploded with light" after he touched Tangina's necklace. It was decided instead that Kane would "decompose on camera." Eventually, by the time the effect was ready, it was decided to re-shoot the rest of the fight scene between Pat (Nancy Allen) and Kane as well, and the puppet head was melted with propane blowers:

He only remembers stuff he did while on stage. He came here late in 88 [I believe she means early 1988] but thats about all he remembers on dates. There is a story about the heads being stored. The wax versions had cornflakes in them for texture. After they were removed from storage there was only a lace frame left as mice and other creatures had eaten all the cornflakes away. It was an amazing thing to see as the wax was intact.
A propane fueled heat blower was used to melt the faces. 3 heads were manufactured. The director was happy with the first take, so the other 2 were stored in John Caglione's garage.

The following photos, drawings, and notes below are all copyright 1987 by Doug Drexler. I'd like to thank Doug sincerely for taking the time to scan these items from his personal collection for use on this web site. Doug was one of the chief SFX makeup desingers on "Poltergeist III," along with his partner and friend John Caglione. At the time, they had a New York City based make-up studio.

Here are some excerpts of email exchanges between Doug and I:

(regarding the possible dates of the re-shot ending)
Doug:
It's funny, so far I do not mention the year anywhere, I guess it was incidental. I see a reference to April 15... the main shoot. I would have to guess the reshoot was before the end of the year. [It was actually March, 1988] I found an 8x10 of that amazing old age on the little girl. I put that up in the lab for Gary Sherman to see, when he walked in.[Gary flew out to NYC to meet with Doug and John about the re-shoot; Gary brought the rough cut with him so they could discuss changes] It has a big label that says: "This makeup did not get 1 close up!"
David: That's funny. I think the only shots in the film of her with the Kane makeup were when she grabs Tangina from the mirror and turns her into a corpse and the very end when she turns on Nancy Allen while Nancy is on the window washing rig.
Doug:That sounds right to me. All of that stuff was shot during the main shoot. When they came in to talk reshoot,  I had that picture with the snotty remark up. It was taken during  principal photography. I think we pretty much spell out what got done in reshoots, in my Gorezone article. I'll keep my eyes open for it!
This is a photo of Heather O'Rourke's double, Kristy Davis, who was used for the end stages of the "Kane" makeup. Notice the post it note which reads "This makeup did not get one closeup!" Doug made sure to place this note and photo in the entrance of his makeup lab, so it would be the first thing Gary Sherman saw when he walked in to discuss plans for the re-shoot of the climax in late 1987: 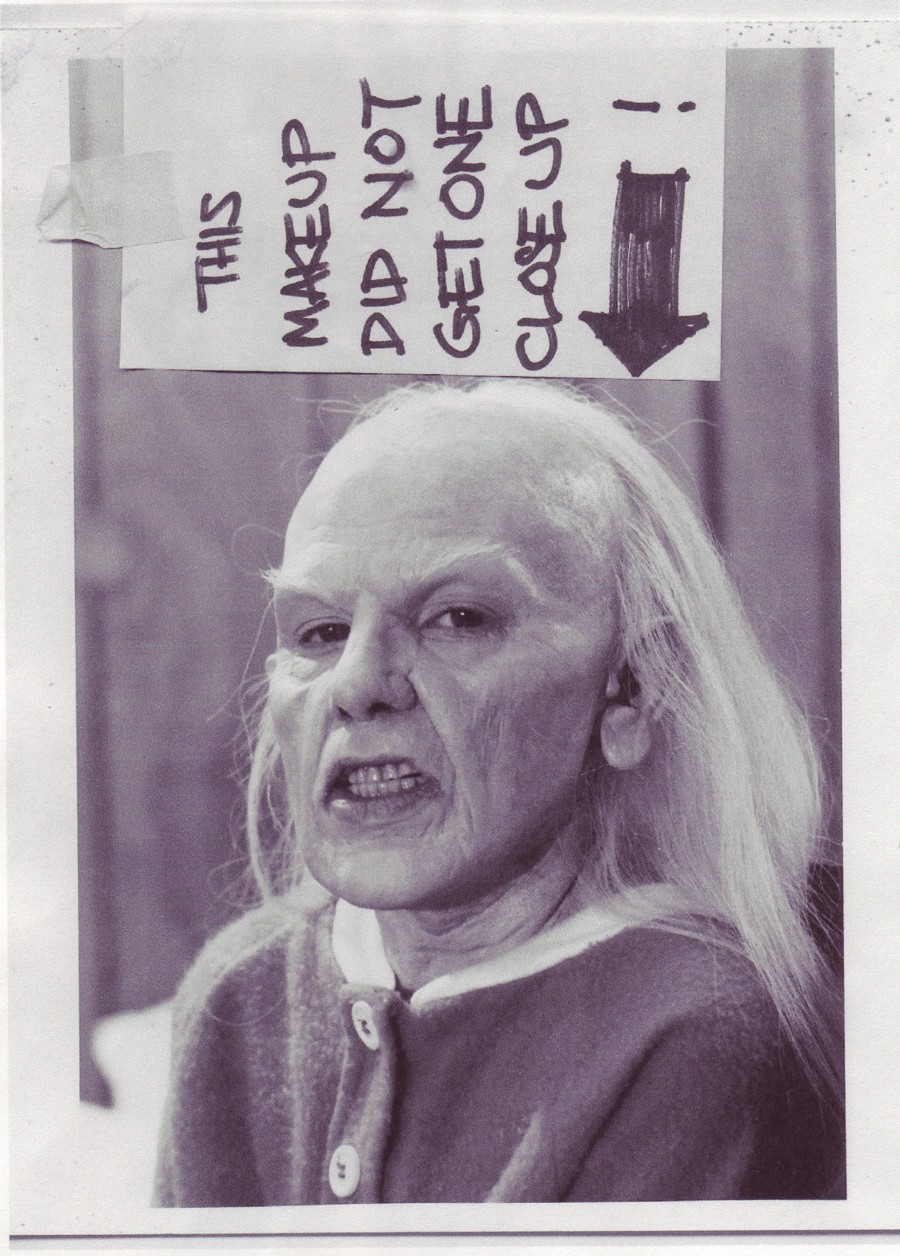 This is a drawing showing plans to build the mummfied version of Tangina:

Here are calendars for the original shoot, April and May of 1987: 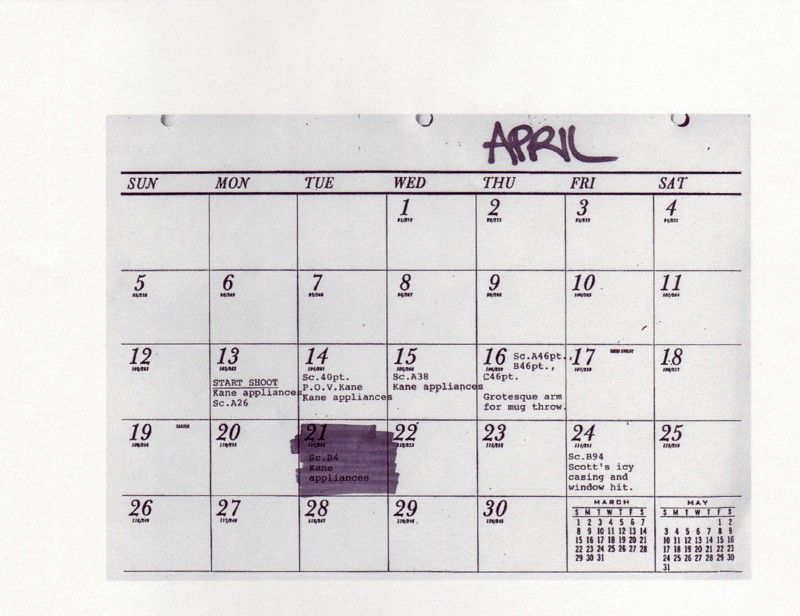 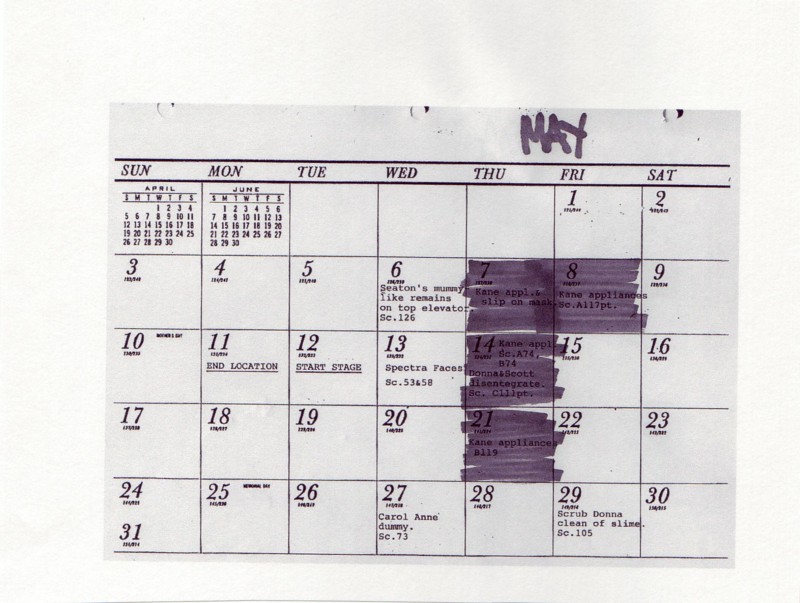 This is a work calendar for the infamous "re-shoot" of P3. However, the month and year are missing. I later discovered this calendar was for March, 1988. 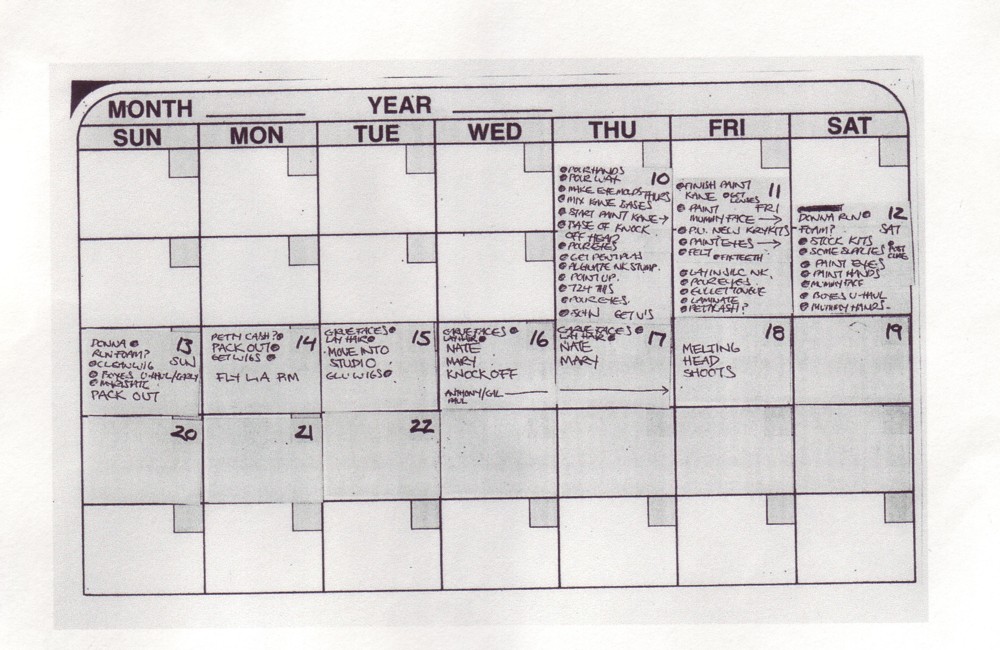 This drawing shows plans for the re-shot ending in which Kane's head rots on the floor after Pat chops it off (notice Doug's note: "I don't think Zelda should come back at the end. It's very confusing."): 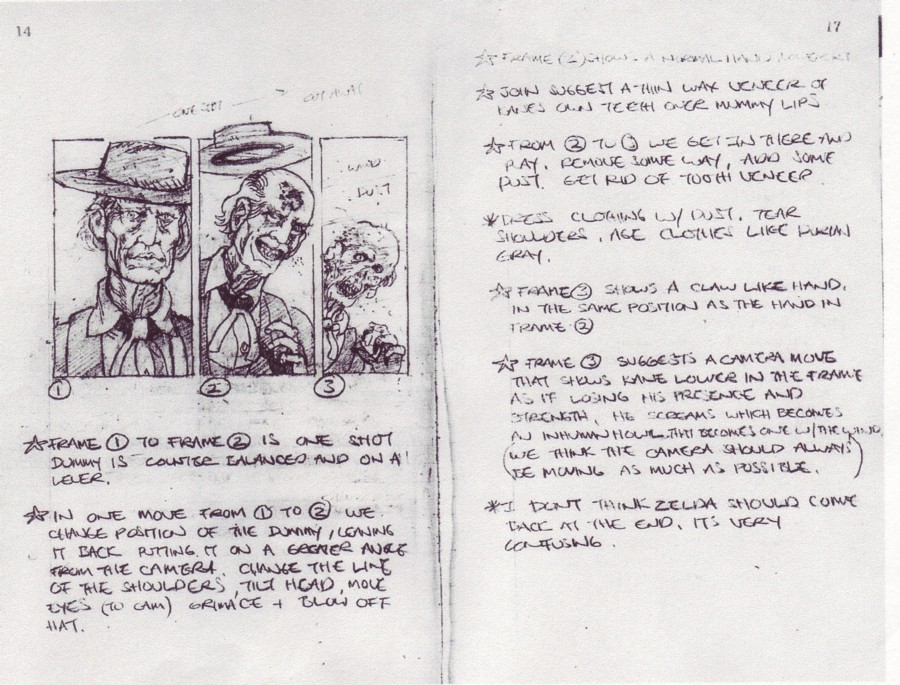 These are reference photos taken of actor Nathan Davis before filming began, and before they applied the "Kane" makeup: 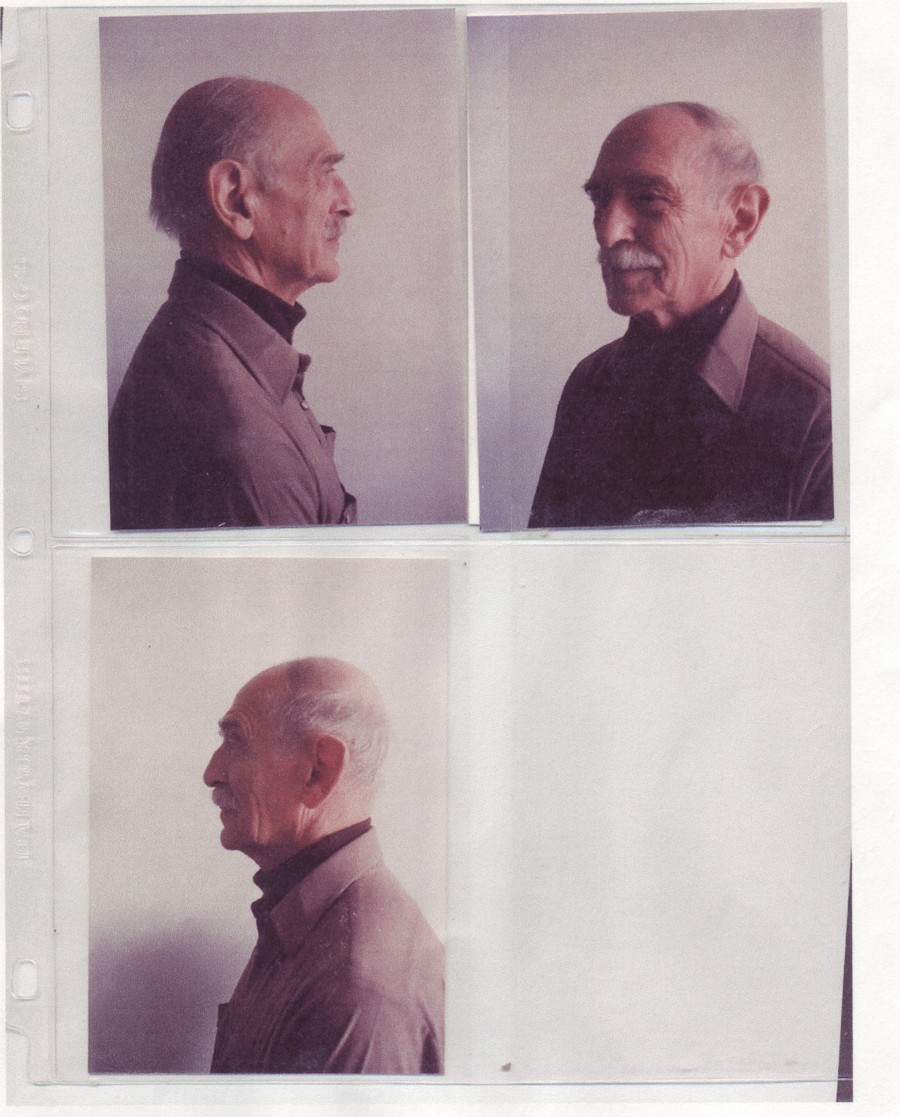 Some polaroids of Nathan Davis in the Kane make-up: 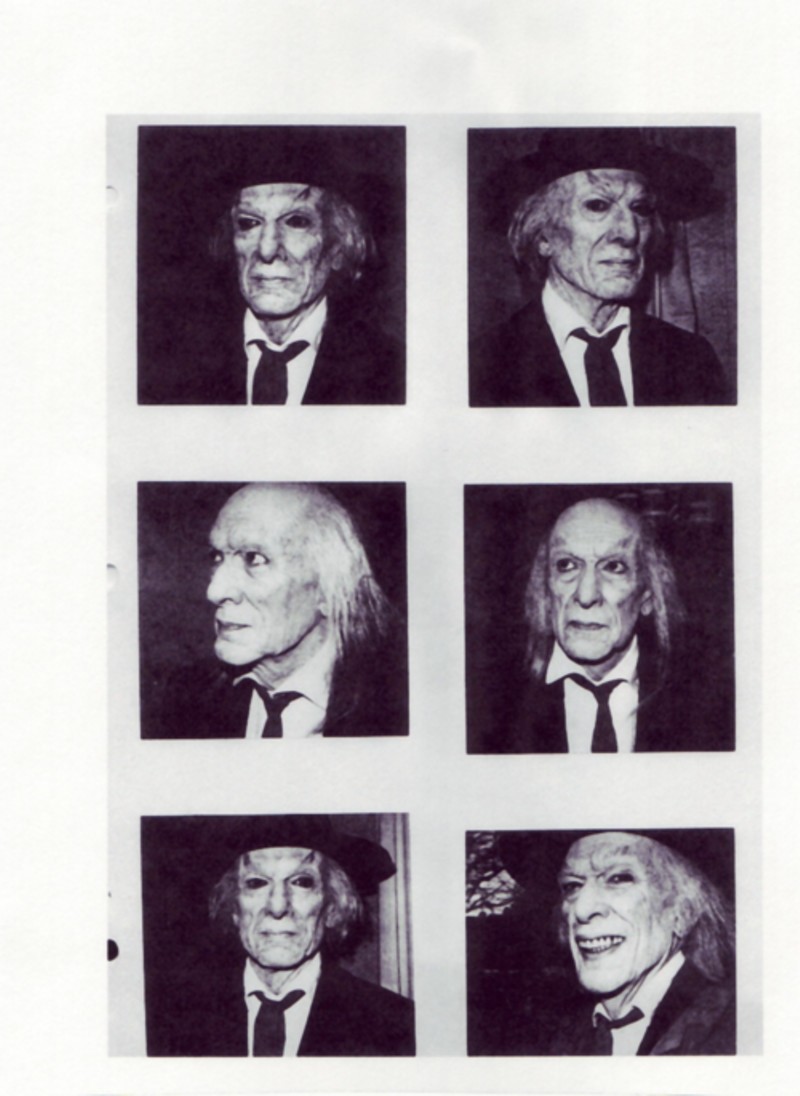 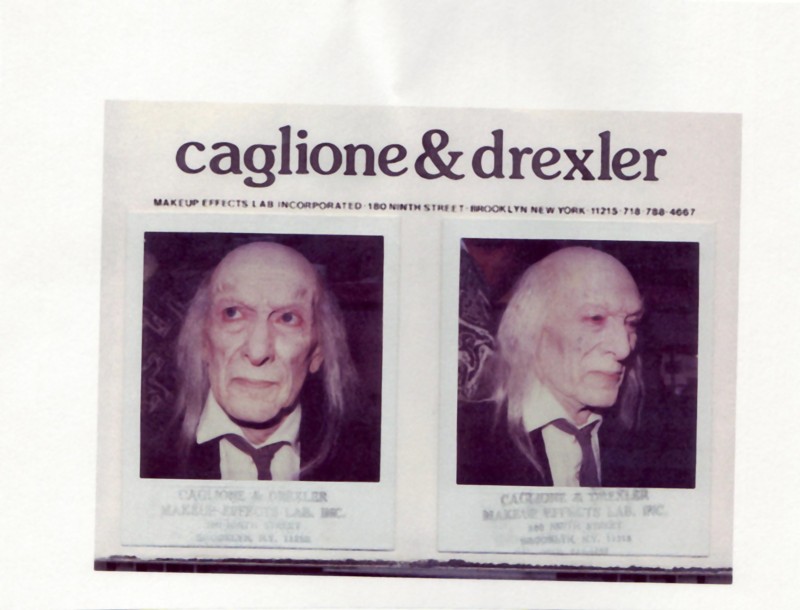 The next two illustrations are "devil dogs" which were from an unused concept and were likely featured in the first two drafts of the script. Apparently, the "gates of hell" were to have opened and creatures such as these would have run out. These dogs were cut, however, because they would have cost too much money:

David: Great drawing...was that an unused concept in an early draft of the script?

David: Too bad they didn't use it! Maybe they cut it for budget reasons?

Doug: It was all about budget. That's the main reason they had almost no opticals.

David: Do you recall what the dogs were supposed to do?

Doug: I think the gates of hell opened and all these guys came streaming in...I'm still looking for my early script...our budget was dirt cheap...$172,000. 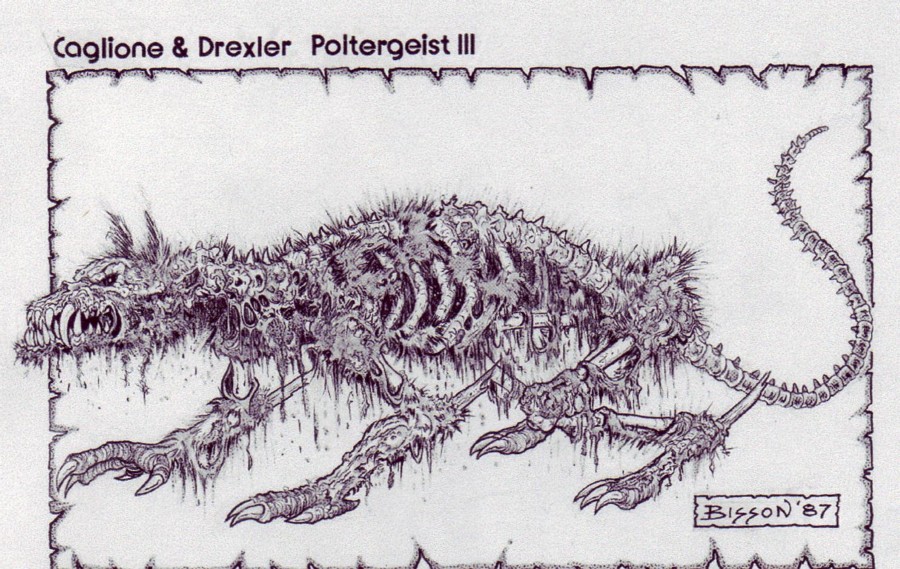 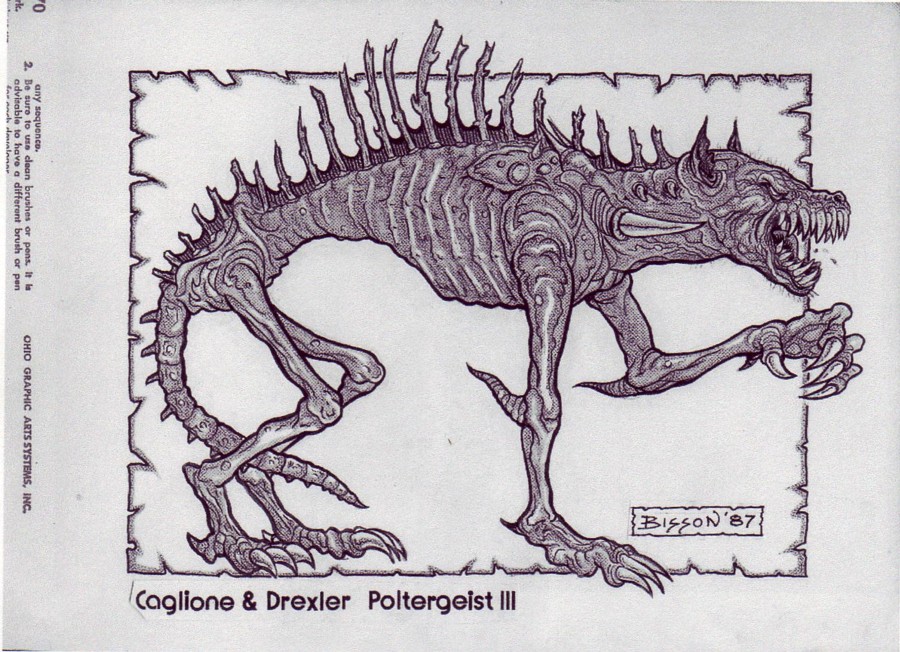 A ghoul of some kind (I don't think this was used in the film either; maybe this creature came with the dogs?) UPDATE: I believe this may have been the statue which turns and looks at Pat early in the film. In the third draft of the script (January 23, 1987) after Bruce enters the frozen bedroom at the end, he stumbles upon that statue, which then attacks him. 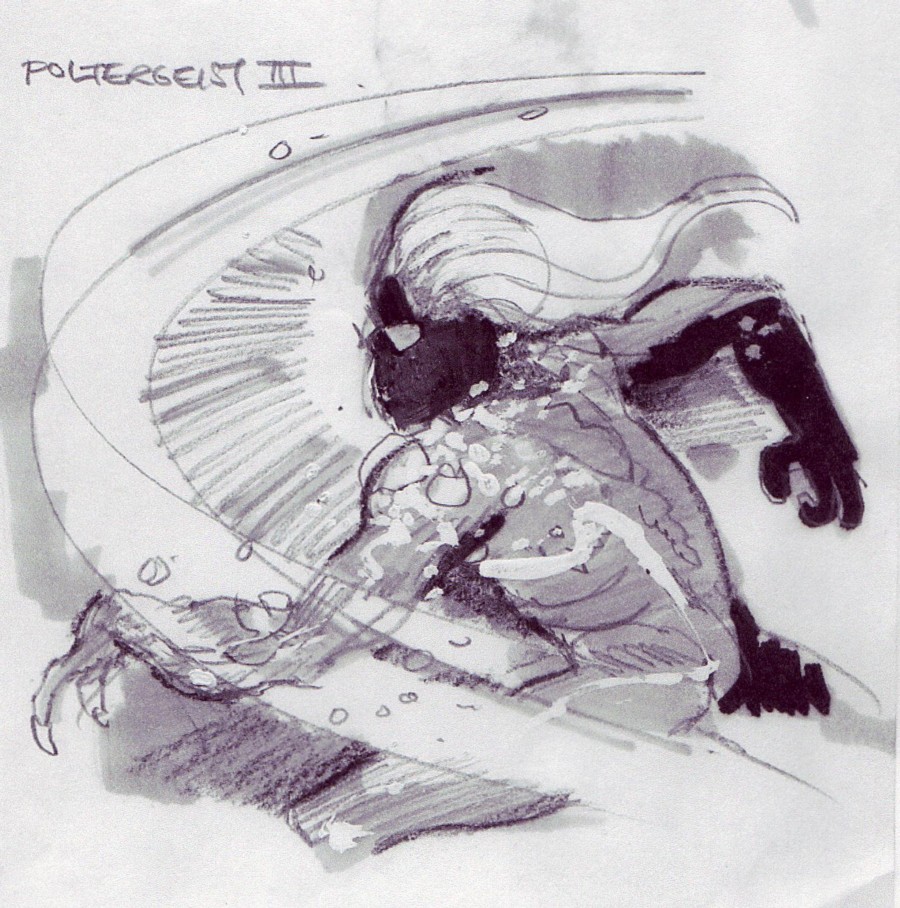 "Decomposition" is apparently a sketch of a much more complex version of the scene where the fake Donna and Scott begin to "make out" in the hallway before Scott rips part of Donna's face. In this version, they both begin tearing at each other until their remains turn into a pile of maggots on the floor. Clearly this was cut for budgetary and (possibly ratings) reasons. 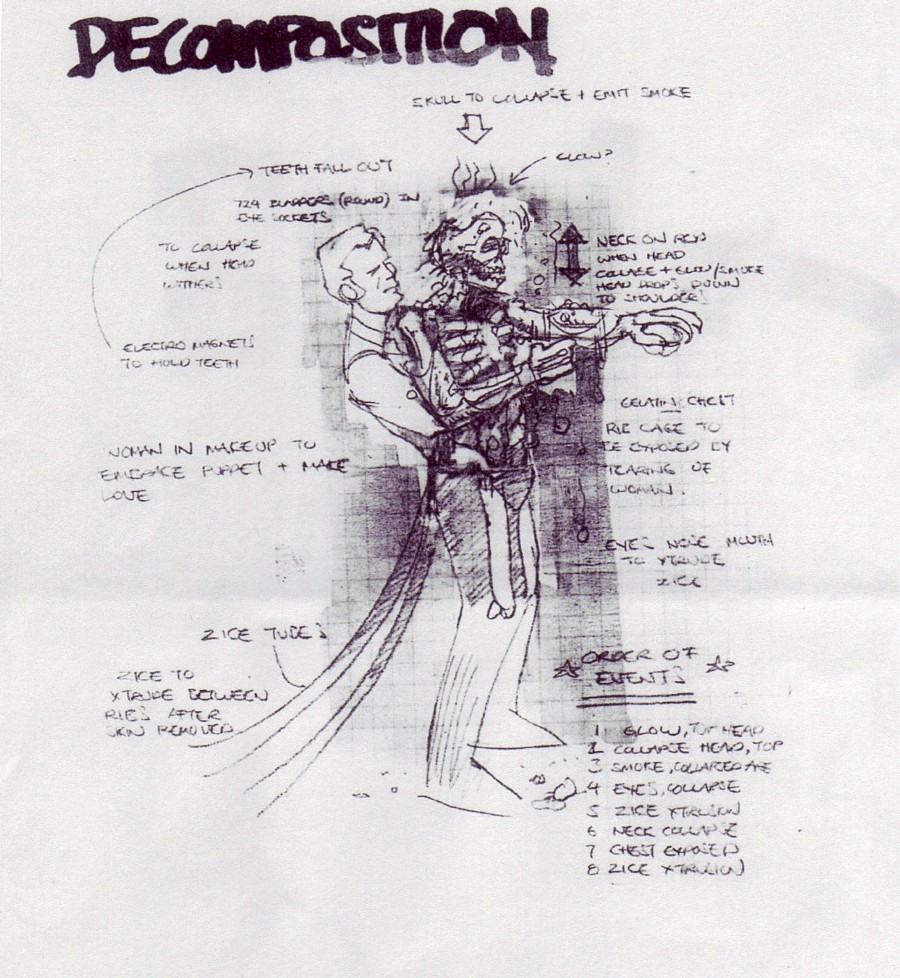 This sketch shows the mechanics under the melting head that was used in the re-shoot (notice the note that says "Ed [Ed Ledding, the production manager] sez Budget Not Approved. Actors not available for shoot date. Effect should be in hold mode"): 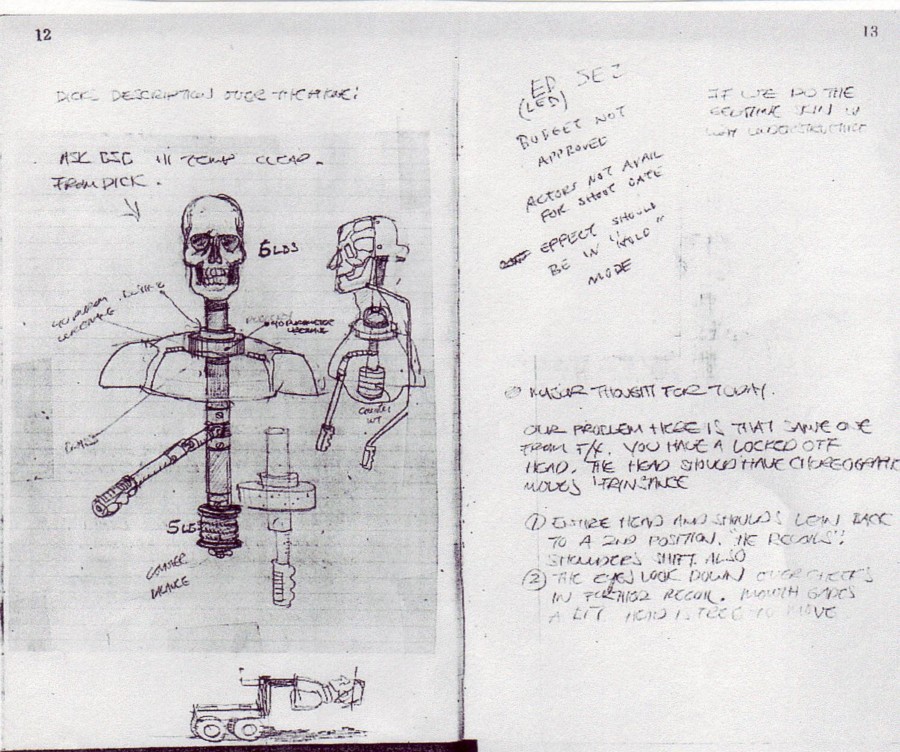 Part II of this section can be seen at www.poltergeistIII.com/makeup2.html

And finally, this is the cover art that Doug Drexler and John Caglione used for their business correspondance at the time they owned their New York Studio (pretty cool!): 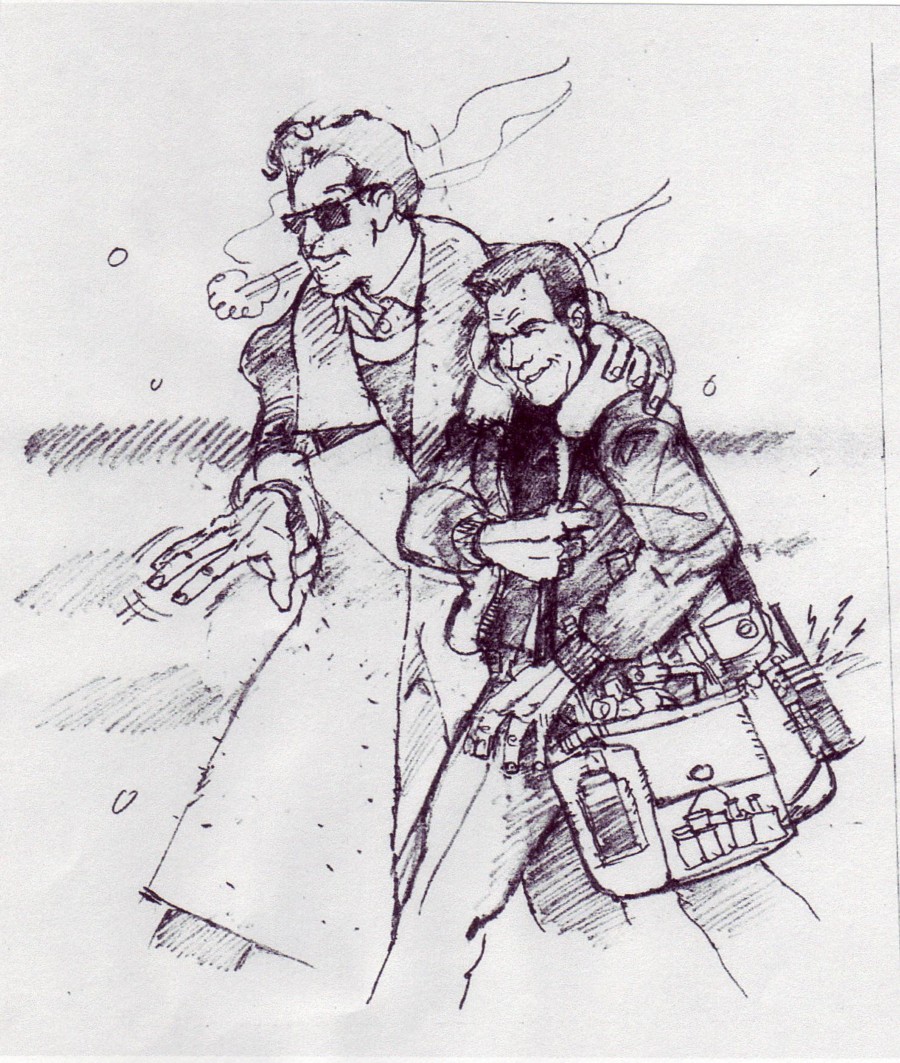