INTO THE LIGHT: To go or not to go?

So, do you go into the Light, or not? What does the Light do? Why is Carol Anne afraid of it? Let's recap what was said in the first two films first:

Dr. Lesh: Some people believe, that when you die your soul goes to Heaven.

Robbie: When grandpa was dead, I was by the hospital bed, and I was watchin. But I didn't see anything go up out of him...

Diane: But his soul was invisible, honey. You couldn't see it.

Robbie: But how come Grandpa's not on television, but Carol Anne...

Dr. Lesh: Some people believe that when people die, there's a wonderful light, as bright as the sun. But it doesn't hurt to look into it. All the answers to all the questions that you ever want to know are inside that Light. And when you walk to it, you become a part of it forever. And then some people die, but they don't know that they're gone.

Robbie: They think they're still alive?

Dr. Lesh: Yes. Maybe they didn't want to die. Maybe, they weren't ready. Maybe they hadn't lived fully yet or they'd lived a long long time and they wanted more life. They resist going into that Light, as hard as the light wants them. They just hang around. Watch TV, watch their friends grow up. Feeling unhappy and jealous, and those feelings are bad...they hurt. And then some people...just get lost on the way to the Light, and they need someone to guide them to it.

Robbie: So some people get angry, and throw things around, like in my bedroom?

Tangina: There is no death. It is only a transisiton to a different sphere of consciousness. Carol Anne is not like those she's with. She's a living prescence, in their spirtual earthbound plane. They're attracted to the one thing about her that's different from themselves. Her life force...it is very strong. It gives off its own illumination. It is a light, that implies life, and memory of love and home, and earthy pleasures. Something they desparately desire, but can't have anymore. Right now she's the closet thing to that. And that is a terrible distraction from the real Light that has finally come for them. Do you understand me? These souls, who for whatever reason, are not at rest. They're also not aware that they have passed on. They're not part of consciousness as we know it. They linger in a perpetual dreamstate, a nightmare from which they cannot awake. Inside this spectral Light, is salvation. A window to the next plane. They must pass through this membrane, where friends are waiting to guide them to new destinies. Carol Anne must help them crossover, and she will only hear her mother's voice. Now, hold on to yourselves. There's one more thing. A terrible prescence is in there with her. So much rage, so much betrayl; I've never sensed anything like it. I don't know what hovers over this house, but it was strong enough to punch a hole into this world, and take your daughter away from you. It keeps Carol Anne very close to it, and away from the spectral Light. It lies to her, it says things only a child can understand. It has been using her to restrain the others. To her, it simply is another child; to us...it is the Beast.

Poltergeist II: The Other Side (written by Michael Grais and Mark Victor, 1986)

Taylor: He's still here. He feels she belongs to him.

Taylor: I'm not sure. But he's used to getting what he wants.

Taylor: He's a man filled with the demon...lost in a dimension that surrounds our world. This entity believes his world and ours are the same.

Diane: But why doesn't he know he's dead?

Taylor: Because he isn't.

Steve: How can that be?

Taylor: Nothing really dies. Like a caterpillar that becomes a butterfly, death only transforms us into another state of being. This man was evil, and his soul remains evil, because he chooses not to see the Light.

Taylor: Until we learn how to defeat him, we do not let him win.

Steve: That's a helluva plan. That's a lot of crap!

Taylor: Listen. Don't come apart now. This spirit is very clever. He knows your strength is your love, and he hates you for that. He's been trying to pull this family apart, and he will continue to try. If he succeeds, he will possess Carol Anne, and destroy your spirit.

Tangina (showing Diane pictures): Uh huh. Below the old cemetary. What seems to be a tomb with many bodies in it, directly below your house.

Diane: Who are they?

Tangina: The researchers don't know who these people are. There are no marked graves. There are, however, records of a religious sect that mysteriously dissappeared.

Tangina: Their spiritual leader was a medium, who led his followers out to California in the early 1800s. They dissappeared near Cueste Verde, and were believed massacred by Indians.

Diane: This could be them.

Tangina: Here is a photo of those people. I think you should have a look at it. I know this is hard for you dear, but I don't really trust my instincts anymore. Now, hold this one, and tell me what you feel...

Diane: Here! At the house! At our door!

Diane: I don't know anything!

Tangina: Yes, you do! You travelled to a dimension few people ever travelled to incarnate. Your daughter is highly clarivoyant, as was your mother I suspect. As you are as well...now tell me what you feel!!

Diane: It is him...it's the preacher. They're following him in death as they did in life. They seal themselves in the cavern because he tells them that the end of the world is coming...the day he predicts for the end comes and goes...but he still won't let them leave! No...no...please God no...

Tangina: Oh Diane...yes it all makes sense now. When you brought Carol Anne back to this world, his followers became restless because they had tasted the light of her being...her life force.

Diane: Now he wants her back...

Tangina: This person is no longer human. He is the Beast.

Dr. Seaton: Sssh... You're in your room in Cuesta Verde, you're safe. Everything's calm. Sssh...Carol Anne, tell me about what's just happened.

Dr. Seaton: Why do you have to lead them, Carol Anne?

Carol Anne: I was born in that house. Robbie, Robbie...the tree's eating Robbie!

Carol Anne (voice from the puddle): The Light! The Light! It's so cold...the light is so cold!

Tangina: Find Donna and go back to your room. Run, Carol Anne, run!

Dr. Seaton: Enough. Stop this stupid sideshow. Oh it's a great act. Carol Anne creates the fire and you feed it.

Tangina: You made this happen. You made her talk about him, you made her remember him...he was lost! You brought him here...

Tangina: Because Kane still thinks he needs her...he was insane when he lived. And now, in death, that insanity has become the Beast. He wants Carol Anne now, before she grows up. Youth is a strong life force; innocence is pure life force. We lose strength as we lose our innocence. You see innocence is the only gift we're given in life; all else must be fought for. In that gift is purity...in that purity...lies strength...

Dr. Seaton: That's a bunch of crap that doesn't mean anything. 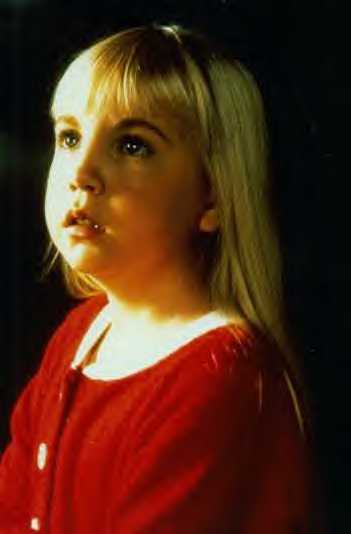